I was raised by readers.

My grandparents had a prodigious collection of classics, but it was my father’s science fiction library that captivated my interest. The first novel I read cover to cover was a Crichton.

Then something wonderful happened.

I mutated into a angsty teenager and between sneaking cigarettes and tattoos, I discovered this perfectly obscure niche of sci-fi called cyberpunk.

To this day, cyberpunk is the most important concept in my lexicon. It encompasses all my greatest literary and aesthetic passions. It is the foundation of everything I love. It defines me.

If you’re a novice to the genre, a cursory search will reveal the most accessible titles.

These six titles are… different.

They are some of the most important novels I have ever read because they eschew convention in a genre that is radical by definition.

They are punker than the punks that punked the world of science fiction.

I’d love nothing more than to grab a coffee with Jeff Noon, because he is a genially weird dude who’s probably dipped his hand in the LSD cookie jar more than a few times.

Vurt was the second cyberpunk novel I read, before Gibson or Sterling came into my life, and nothing compares to it. It makes Burgess’ A Clockwork Orange seem like prosaic schoolyard scrap among well-bred kids.

The story revolves around a misfit troupe that spend the better part of their lives in a shared toxic delusion accessed by swallowing mind-altering feathers. Like in many of Noon’s other novels, some catalyst between reality and phantasmagoria breaks down and the world of myth invades unaltered perception with dire consequences.

Noon is the literary heir to Lewis Caroll’s tradition, every one of his novels is as much fantasy as it is science fiction, with serpentine twists and mind-boggling dimensions. It’s an outlandish trip, a gripping lettered hallucination.

Ribofunk opens with the predicament of a teenager coming off a drug trip, stranded on top of a skyscraper in Television City.

FOLLOW. SIN, ASP! SAID THE SYNAPSE. MATCH IT, BATCH IT, LATCH IT. BEAT THE BARRIER! SNAP THE GAP! AXE YOUR AXONS . KEEP YOUR RECEPTORS FILLED.

This was the first cyberpunk novel I read and no single piece of literature will ever be as dear to me as this collection of lifestyles in Di Filipo’s dystopian future.

It follows a pair of tweens bullied into ditching school to get fitted with bioengineered horns. It tells the story of how the Canadian Prime Minister was betrayed by his genetically engineered servants. Wannabe teenage gangbangers, a noir detective story, the plight of a homeless woman: every vision in Ribofunk is so intense and unique it builds a potent illusion.

Di Filippo arguably hangs on the fringes of the cyberpunk genre, his stories delve more in genetic modification than cybernetics and implantable technologies (see biopunk). Yet Ribofunk acknowledges simultaneous transhumanist trends. The emotive complexity of emergent lifestyles give the impression of not just a single narrative snippet, but of a convergent albeit dystopian society.

“What a nuisance it was, being desperate to stay alive.”

By the time the Budayen Nights Trilogy was finished, cyberpunk literature was well grounded as a genre and its early apostles had more Hugo awards than they could fit in a trophy cabinet.

So why is this novel so relevant?

Because it follows a luddite hussler and his trans girlfriend as they tangle with a devoutly Muslim underworld kingpin to cleanse his domain of a brutal serial killer.

When Gravity Fails is freakin revolutionary.

First of all, in spite of the progressive affectations of science fiction novels, I can’t name another book that actually includes a trans woman. Prove me wrong in the comments below please, because it’s pretty sad how in all the imagined dystopian worlds of sex, drugs and cat-lizard-human-splices, challenging the gender dichotomy is still somehow a taboo.

Secondly, the Middle Eastern setting is hardly a mere backdrop to the adventure, but integral to the plot and the predispositions of the novel’s protagonists. Effinger features the Muslim tradition with reverence, faithfully presenting Islamic philosophy and, in stark contrast, the hypocrisy of corrupt religious institutions.

And lastly, Audran is a spectacular anti-protagonist who doesn’t want a damned thing to do with the venture laid before him. A down-on-his-luck trickster figure torn out of the pages of a folkloric tale, he is nevertheless dragged kicking and screaming into political intrigues and a cybernetic future he deeply fears and resents.

Rucker’s seminal work is enormous in scope. Only Schismatrix holds a candle to this generation-spanning saga, but sadly Sterling’s novel starts to read like a history textbook and loses some of its punk allure.

The Ware Tetralogy is jocular, ludicrous and brilliant from cover to cover. Starting with a geezer living out his last days exiled in the Baby Boomer wasteland of Florida, and a stoner kid on the run from a cannibal gang, no one can possibly anticipate the relevance of the choices made by the unlikely duo.

Rucker’s style is deceivingly simplistic. His vision is daring like no other.

Where most of Gibson’s novels flirt with the encroaching edge of an event horizon, The Ware series plunges headfirst into not one but four revolutions that forever alter the course of humanity.

From the first generation of emancipated machines, to the ultimate emergence of “realware” the ability to instantiate any object from thin air, Rucker’s boldness and imagination know no bounds.

What if everyone of us had god like powers?

How do you write about something so impossible? How do you imagine the unimaginable? Ask Rucker he’s figured it out. 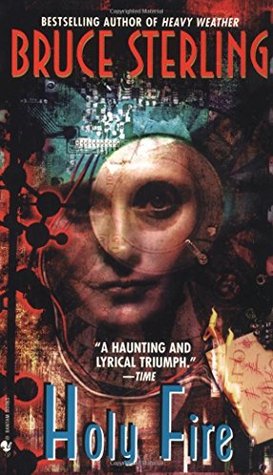 That Sterling is a force to be reckoned with in the genre is hardly news, his name is among the first few to come on the lips of cyberpunk lovers.

As such Holy Fire is an underrated gem and a treat to any lover of philosophy and liberal arts.

Science fiction has desensitized audiences to the notion of rebirth (revival, reskinning, resleeving etc). It’s as natural as drinking water (perhaps moreso) in every futuristic literary endeavour, which undermines the ontological blow of waking up anew in an unfamiliar body and mind.

In a faustian bargain with medical science, the protagonist of Holy Fire is returned to youth and finds herself at the mercy of impulses and desires that contradict her lived experience. Catapulted into a manic wanderjhar she painfully learns experience does not equate wisdom and the malleability of her own morality induces tremendous existential shock.

Holy Fire is a novel for students of the arts and art history. It is a postmodern equivalent of Mansfield Park and Dorian Grey, steeped in classic tradition yet nevertheless bold and visionary. None other than Bruce Sterling could marry high brow philosophy and cyberpunk and yield such a prodigious child.

In case you’ve ever wandered about my online handle, here it is: the web is where Synners escape.

Cadigan is my heroine, an excellent weaver of tales and a prominent feminist voice in a male dominated industry and genre.

Her characters in turn are punk rocker femme hacker extraordinaire, bent on raining hell and fire on their blighted generation and the all encompassing illusion bred by corporate interests.

“If you can’t fuck it and it won’t dance, eat it or throw it out”

Pat Caddigan’s prescience is utterly surreal and unlike so many other dystopian novels it aged very well.

Synners is truly America’s coming of cybernetic age story. It’s crass and brilliant at once, delivering filth and street wisdom in the same dish.

I’ll be brief because nothing I say about Transmetropolitan can do it justice.

Read it now. Today. This is more relevant in the year 2018 than it ever has.

But don’t just read it.

“There’s one hole in every revolution, large or small. And it’s one word long – people. No matter how big the idea they all stand under, people are small and weak and cheap and frightened. It’s people that kill every revolution.”

You see, the narrative mainstream of Spider Jerusalem, his filthy assistants and two headed gecko-eating cat on the hunt of political conspiracies pales in comparison to the dystopian visions built in Darick Robertson’s illustration.

Every one of his pages reveals an infinite depth. A keyhole view into a world of Ebola Cola, casual cannibalism, 24h reality TV networks, bioengineered transformations, squalor and dismaying opulence all at once.

A single panel can wordlessly transcribe so much human misery and redemption, so much life and lived experience. His depictions of The City are the true story of Transmetropolitan.

Other lists for cyberpunk sophomores:

where the mind wanders